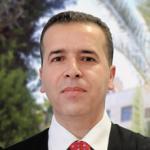 Research Project Purpose: In a pilot study, the inhibitory activity of several phytochemicals was checked against two key enzymes that aid in glucose absorption: alpha-glucosidase and alpha-amylase. Phytochemicals screened in the extract from O. basilicum were tested for their binding affinities, inhibition constants and the root mean square deviation (RMSD) values for the ligand structure upon docking from the reference structure. Three compounds showed potent inhibition to both alpha-glucosidase and alpha-amylase: betasitosterol, followed by 4,7-dimethoxyindan-1-one, and then caffeic acid. Week nonpolar contacts accounted for most of the interactions at the binding interface, with few polar contacts, seen as hydrogen bonding between the ligand and the indicated amino acid residues. The inhibitory action of the same chemicals was also figured out in vitro. Results for the docking experiments met well with the in vitro evaluation.

Main outputs/results: The growing smooth-talk in the field of natural compounds is due to the ancient and current interest in herbal medicine and their potentially positive effects on health. Dozens of antidiabetic natural compounds were reported and tested in vivo and in vitro. The role of these natural compounds, their actions on insulin signaling pathway, and the stimulation of the insulin-responsive translocation of glucose transporter-4 (GLUT4) to the plasma membrane are all crucial in the treatment of insulin resistance and diabetes. We had so far tested the efficacy of tens of medicinal plant extracts in treating diabetes in vitro and in vivo. Moreover, the chemical composition of the effective extracts was detected by GC/MS. Since this research group was initiated in 2017, we started to apply bioinformatics tools (in parallel with the wet lab studies) in an attempt to detect potential active ingredients that might interact with proteins in the insulin signalling pathway.

To this end, the authors recently developed a reaction network model of the insulin signalling pathway of the GLUT4 translocation. This model is written in the modeling language and given in graphical syntax (see below Figure). It contains a set of reactions (boxes) and a set of species (ovals). Reactions have reactants (incoming solid edges), products (outgoing solid edges), activators (dashed incoming bullets) and inhibitors (dashed incoming hammers). Pancreas produces an inflow, which eventually activates the absorption of glucose in the blood into the cell. The semantics of a reaction network is deterministic but with variables for unknown kinetic expressions. It is given by a system of ordinary differential equations (ODEs), that specifies the possible dynamics over type in dependence of the unknown kinetic variable. We are mostly interested in the steady states of the ODEs. In this case, the ODEs can be simplified to a system of linear equations, which variables for the kinetic functions that are subject to kinetic constraints: inhibitors slow down reactions, activators and products speed them up. 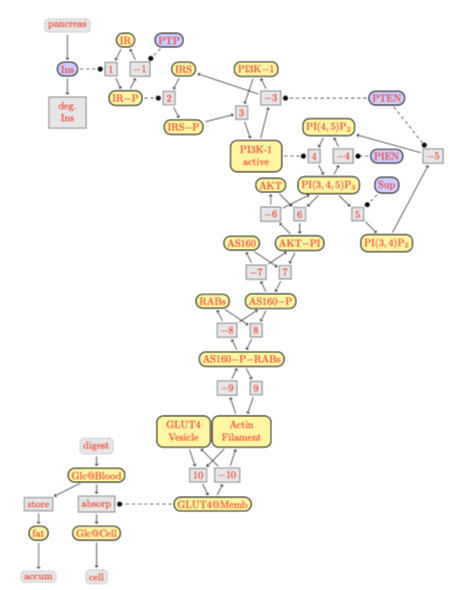 A figure depicting reaction network of the insulin pathway.

Expected future impact: In addition to the scientific objectives, in this project, we suggest to bridge the gap between European and Palestinian patients inclination towards traditional and herbal medicine and the complexity of modern supportive diabetes management. We suggest constructing a training program that will maximize beneficence from effectiveness of Middle-Eastern herbs in diabetes management, minimize maleficence from safety issues, and provide an ethical and communicational structure for professional, open, and non-judgmental integrative medicine consultation aimed to improve diabetes patients' well-being. We propose in this project to determine the potential efficacy and safety of natural ingredients from traditional medicinal herbs in the context of patients' empowerment and the ability to face better the challenges of diabetes treatment. Indeed, this project has the potential to point out new natural anti-diabetic drugs which is of worldwide interest.

Future Plan: We aim at establishing a Palestinian ‘scientific research core unit’ at the Arab American University-Jenin such that the Palestinian medicine replenishes current research on drug discovery. Having highly specialized scientists in cell biology and biochemistry (Prof. Dr. Zaid), bio-informatics (Dr. Shanak), and the support of the commuter scientist from Lille (Dr. Cedric and Dr. Joachim), our research group will be both highly competent and competitive to achieve its goals.

Main Impact: This project has the potential to point out new natural anti-diabetic drugs which is of worldwide interest

Publication: All peer-reviewed publication are available at: