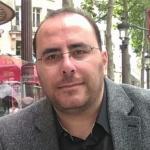 Dr. Salhab received the B.Sc. degree in electrical engineering from Palestine Polytechnic University, Hebron, Palestine, in 2004, the M.Sc. degree in electrical engineering from Jordan University of Science and Technology, Irbid, Jordan, in 2007, and the Ph.D. degree from King Fahd University of Petroleum and Minerals (KFUPM), Dhahran, Saudi Arabia, in 2013. From 2013 to 2014, he was a Postdoctoral Fellow with the Electrical Engineering Department, KFUPM.

He is currently an Associate Professor and the Assistant Director of the Science & Technology Unit in the Deanship of Scientific Research, KFUPM. Dr. Salhab is a Senior Member of the IEEE. His research interest spans special topics in modeling and performance analysis of wireless communication systems, including cooperative relay networks, cognitive radio relay networks, optical wireless networks, visible light communications, and co-channel interference. He published more than 80 journal and conference papers, in addition to 7 issued patents. Dr. Salhab is an Associate Editor for Frontiers in Communications and Networks journal. In addition, he has been serving as a member in technical program committees of several IEEE conferences. The IEEE WIRELESS COMMUNICATIONS LETTERS selected him as an Exemplary Reviewer for his reviewing service in the journal in 2014. Recently, he has been nominated by ISI and SCOPUS among the first 10 faculty and researchers in KFUPM (2013-2018) for the “Excellence Award for Scientific Production (Engineering and Technology Field)” offered by the Saudi Digital Library, Ministry of Education, Saudi Arabia.