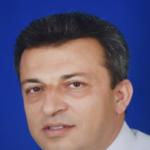 Muayad Abu Saa is the Dean of Faculty of Sciences at Arab American University (AAUP) since 1/9/2017 and the Head of Physics Department at AAUP since 1/9/2016. Also, he is a lecturer at Physics Department at AAUP in both under graduate and graduate programs since 1/9/2003. Muayad AbuSaa has a PhD in Laser Physics from VUB (Free University of Brussels), a master of Physics from EMU (Eastern Mediterranean University- North Cyprus) and a BSc in physics from Yarmouk University in Jordan. He is a researcher in the fields of laser physics, semiconductors and nanotechnology. A list of publications can be found at researchgate, scopus and  google scholar.