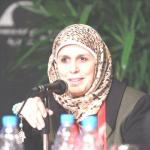 Hala J. El-Khozondar was born in Gaza, Palestine. She got her B.Sc. in Physics from BirZeit University, Palestine in 1987 and education certificate in 1988. She earned her Ph.D. in physics from New Mexico State University (NMSU), USA in 1999. She joined the physics faculty at BirZeit University in 1987.  She had a Postdoc award at Max Planck Institute in Heidelberg, Germany in 1999.  In 2000, she worked as assistant professor at the electrical engineering (EE) department in Islamic University of Gaza. In 2007, she was promoted to associate professor at EE department. She is a full professor at EE department science 2013. Further, she is affiliated to several professional bodies: she is an honorary member at engineering syndicate (number 1), a member of international society of Muslim women in science (ISMWS), member of Organization for Women in the Science for the Developing World (OWSD) and the secretary general of the executive committee of Palestinian chapter, and a member of graduate women society in Gaza Strip. She is also a fellow for the Islamic World Academy of sciences (IAS), ICTP senior fellow and fellow for the world academy of science (FTWAS) and for the Arab region FTWAS-ARO. She hold the title "alumni Research ambassador" by Technical University of Munich. She has high leadership and administrative skills demonstrated by her work in initiating and developing the quality assurance unit and the external relations at Islamic University of Gaza. She is a member of selection committees for several scholarships and prizes; i.e., Ford, AlFakhora and Clinton. She advises several graduate and undergraduate students. She participated in several conferences and workshops. She has lead several session in international conferences and chaired scientific committee for several conferences.

She has 100 publications in national and international journals with high reputations. She is a recipient of international awards and recognitions, including a Fulbright Scholarship, DAAD short study visit, Alexander von Humboldt-Stiftung Scholarship, Erasmus Mundus, Altaawon and Bank of Palestine Zamalah senior visit, Mevlana Exchange Programme, and Distinguished Scholar Award, the Arab Fund Fellowship Program, Kuwait, 2017. She earned several prizes including the Islamic University Deanery Prize for applied sciences 2010, TWAS medal lecture 2015 and ISESCO Prize in Science & Technology 2014, and the Dr. Sultana Nurun Nahar and Buroug Arrhman prize for "teachers and student prizes" in engineering 2017, Islamic University of Gaza Vice president office for research and graduate studies prize for having highest score in Gshcolar and RG Score for year 2017 and 2018, and An-Najah university best published paper in 2018 in the scientific journal. She is also coordinator for several projects including TEMPUS for promoting long life learning, and Al-Maqdisi to enhance collaboration with French partners and renewable energy 4 Palestine funded by APPEAR 2017 to promote women performance at electrical engineering department APPEAR funded by Austria.