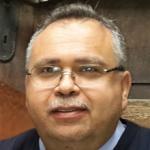 Nader Shehadeh Hrimat is A Palestinian agriculture expert. He received his bachelor degree in agricultural engineering/Plant production from the University of Jordan in 1989. He received a Master’s degree in Plant production/Plant breeding from the University of Jordan in 1992. Since that time, he became more interested in agriculture and natural resources management researches. After he finished his masters, he came back to Palestine, where he employed as a lecturer to give lectures on plant production, field crops and plant physiology, in Al-Najah University in the West Bank. Since the year 1994, he started working at the Applied Research Institute-Jerusalem (ARIJ) in Bethlehem, where he started the field crops breeding and production improvement program, focusing on improving the agricultural sector in Palestine, conducting researches on natural resources management including the protection and sustainability of biodiversity, forestry, rangelands as well agricultural water management, climate change and desertification mitigation and adaptation through practicing innovative and better practices with focus on socioeconomic impacts and food security status in Palestine. Furthermore, he is developing projects and programs towards increasing the economic contribution and added value of agro-commodities and to empower the socioeconomic role of Palestinian cooperatives as social based entrepreneurs with focus on improving ago-production, quality control, post-harvest and marketing issues along the value chain. Currently Mr. Hrimat is the Deputy Director General and the Head of the Sustainable Agriculture Program at ARIJ. Also, Nader is the Chairman of the New Farm Company (representing ARIJ) since the year 2008 and still.