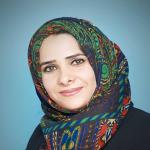 Shurouq Ghalib Qadous born in Nablus city. In 1988 when  I earned my bachelor's degree in nursing from AL-Quds University, Palestine. It did not take a long time to find a job after graduation since there was a lack of women staff nurses in the majority of hospitals in Palestine.

She began working in the Red Crescent Hospital in Jerusalem and in a short period of time, she became the senior staff nurse of the normal nursery and neonatal intensive care unit. After fulfillment, her master's degree in 2003 from AL-Quds University, she determination to see an increased involvement of women in the nursing field in Palestine did not stop there.  From 2005 until now, she joined An-Najah National University, Nursing, and Midwifery department as teaching staff. Now she is a Ph.D. scholar at Prince Songkla University, Faculty of Nursing, Thailand since 2018.