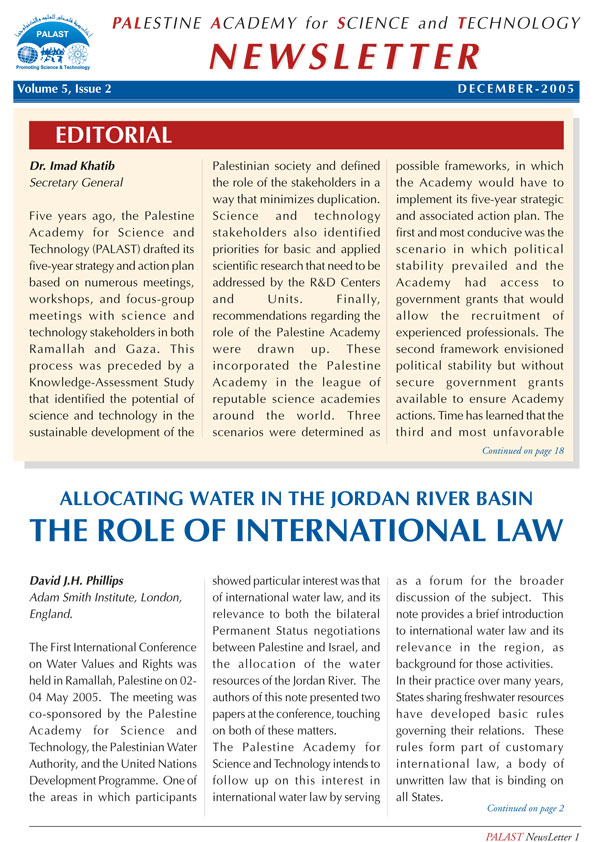 Five years ago, the Palestine Academy for Science and Technology (PALAST) drafted its five-year strategy and action plan based on numerous meetings, workshops, and focus-group meetings with science and technology stakeholders in both Ramallah and Gaza. This process was preceded by a Knowledge-Assessment Study that identified the potential of science and technology in the sustainable development of the Palestinian society and defined the role of the stakeholders in a way that minimizes duplication. Science and technology stakeholders also identified priorities for basic and applied scientific research that need to be addressed by the R&D Centers and Units. Finally, recommendations regarding the role of the Palestine Academy were drawn up. These incorporated the Palestine Academy in the league of reputable science academies around the world. Three scenarios were determined as possible frameworks, in which the Academy would have to implement its five-year strategic and associated action plan. The first and most conducive was the scenario in which political stability prevailed and the Academy had access to government grants that would allow the recruitment of experienced professionals. The second framework envisioned political stability but without secure government grants available to ensure Academy actions.