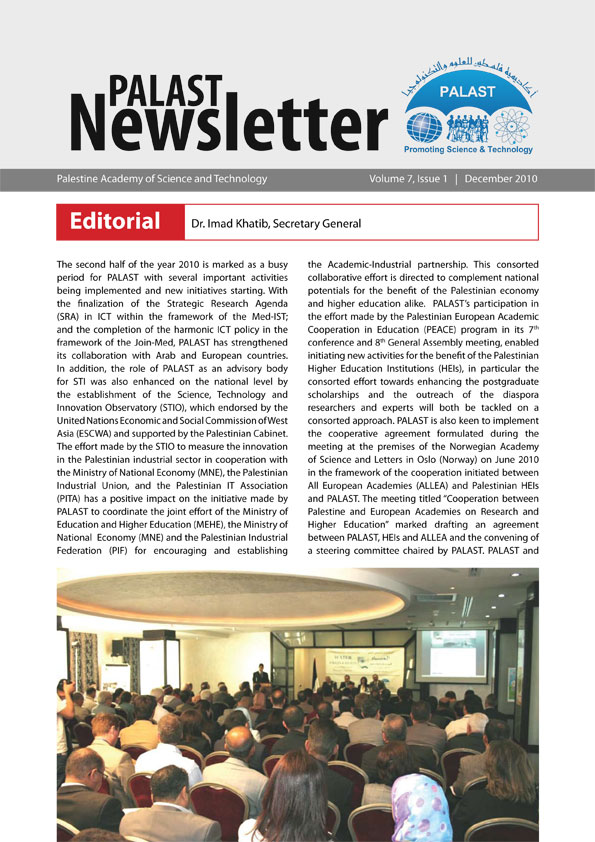 The  second  half  of  the  year  2010  is  marked  as  a  busy period   for   PALAST   with   several   important   activities being  implemented  and  new  initiatives  starting.  With the   finalization   of   the   Strategic   Research   Agenda (SRA)   in   ICT   within   the   framework   of   the   Med-IST; and  the  completion  of  the  harmonic  ICT  policy  in  the framework  of  the  Join-Med,  PALAST  has  strengthened its  collaboration  with  Arab  and  European  countries. In  addition,  the  role  of  PALAST  as  an  advisory  body for  STI  was  also  enhanced  on  the  national  level  by the   establishment   of   the   Science,   Technology   and Innovation  Observatory  (STIO),  which  endorsed  by  the United Nations Economic and Social Commission of West Asia (ESCWA) and supported by the Palestinian Cabinet. The effort made by the STIO to measure the innovation in  the  Palestinian  industrial  sector  in  cooperation  with the Ministry of National Economy (MNE), the Palestinian Industrial   Union,   and   the   Palestinian   IT   Association (PITA)  has  a  positive  impact  on  the  initiative  made  by PALAST  to  coordinate  the  joint  effort  of  the  Ministry  of Education and Higher Education (MEHE), the Ministry of National  Economy (MNE) and the Palestinian Industrial Federation   (PIF)   for   encouraging   and   establishing the   Academic-Industrial   partnership.   This   consorted collaborative  effort  is  directed  to  complement  national potentials  for  the  benefit  of  the  Palestinian  economy and  higher  education  alike.    PALAST’s  participation  in the  effort  made  by  the  Palestinian  European  Academic Cooperation  in  Education  (PEACE)  program  in  its  7th conference and 8th General Assembly meeting, enabled initiating new activities for the benefit of the Palestinian Higher  Education  Institutions  (HEIs),  in  particular  the consorted  effort  towards  enhancing  the  postgraduate scholarships    and    the    outreach    of    the    diaspora researchers   and   experts   will   both   be   tackled   on   a consorted approach. PALAST is also keen to implement the   cooperative   agreement   formulated   during   the meeting  at  the  premises  of  the  Norwegian  Academy of  Science  and  Letters  in  Oslo  (Norway)  on  June  2010 in  the  framework  of  the  cooperation  initiated  between All  European  Academies  (ALLEA)  and  Palestinian  HEIs and  PALAST. The  meeting  titled “Cooperation  between Palestine  and  European  Academies  on  Research  and Higher   Education”   marked   drafting   an   agreement between PALAST, HEIs and ALLEA and the convening of a  steering  committee  chaired  by  PALAST.  PALAST and ALLEA role will be to coordinate activities between the Palestinian and the European HEIs.Several other important activities took place during the same period and others are still to be implemented, yet the  turning  of  the  2010  and  the  beginning  of  the  new year 2011, PALAST wishes to seize the opportunity to wish all  colleagues’  a  happy  new  year  with  more  academics and  scientists  involved  in  the  effort  of  bringing  peace, justice  and  better  conditions  for  the  present  and  the future  generations.  And  for  those  colleagues  who  we highly  respect  for  their  devotion  we  say:  keep  up  the good work.