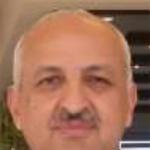 Dr. Fahed M. Takrori was born in 1960. He got his B.Sc. in Chemistry from University of Jordan (1983), M.Sc. (1986) and Ph.D. (1991) in the field of polymer chemistry from Middle East Technical University/Turkey. He started his work at chemistry department/Hebron University as Assist. Prof. in 1992 and was promoted as Assoc. Prof. in 2018. During his work he was appointed acting Dean of Faculty of Science (1997-1999 and 2017-till now) and Chairman of Chemistry Department (2007-2011, 2015- 2017). He worked in many projects and most notably a joint project between Hebron University and Oslo University/Norway entitled “Building Competence in Epidemiology in Palestine” in the period 1995-2002. The project included many workshops, training courses, lectures, and scientific research published in several peer-reviewed journals. He spent 5 months in a sabbatical leave at Sabancɪ University/Turkey during the academic year 2010-2011 as part of Erasmus Mundus program supported by EU. He worked in the field of proton exchange membrane fuel cells. During the period 2012-2016 he represented Hebron University in a project entitled “Strengthening University-Enterprise Linkages in Palestine” or (STEP) supported by Tempus EU projects. His research main interests are: polymer chemistry, surface chemistry and occupational safety and work hygiene. He has 11 publications including a book in the field of polymer chemistry (in Arabic).