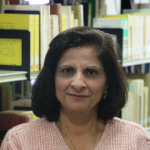 Dr. Huwaida Rabie is the Chairperson of the Department of Mathematics and Physics at Bethlehem University.  She received a Bachelor degree in Mathematics from Bethlehem University in 1984, and a Master degree in Statistics from American University in Washington DC in 2000.  She earned her Ph.D. in Applied Statistics from the University of Missouri-Columbia in 2004. Her dissertation entitled “Optimal Designs for Contingency Response Models”. She accepted the position of Assistant Professor at Bethlehem University in 2013, where she teaches Statistics and Mathematics at the Department of Mathematics.  She served as a Post-Doctoral Fellow working in the Department of Biostatistics, Bioinformatics, and Biomathematics at Georgetown University from 2004-2007.  She then moved to Australia and worked as Post-Doctoral Fellow at the Commonwealth Scientific and Industrial Research Organization in Australia from 2007-2010.  She was offered a Research Fellow at the University of South Australia from 2010-2013.  Dr. Rabie’s publications were in the field of experimental designs and Applied Statistics.