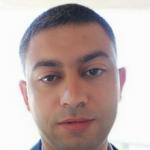 Mohammad Adm is an assistant professor at the Department of Applied Mathematics and Physics, Palestine Polytechnic University. His responsibilities as an assistant professor at the Palestine Polytechnic University include academic leadership in research, teaching, and faculty professional development. Dr. Adm is a group leader of the cooperative research group "Linear Algebra and Matrix Analysis" at Palestine Polytechnic University and an active member of the "Discrete Mathematics Research Group" at the University of Regina in Canada. He has collaborators in Canada, China, Germany, Jordan, Palestine, and USA.  In 2009 and 2012, he was awarded two scholarships from the German Academic Exchange Service (DAAD) to attain the master and doctoral degrees in mathematics from The University of Jordan in Jordan and University of Konstanz in Germany, respectively. In January 2016, he received his doctoral degree in mathematics from the University of Konstanz in Germany with the highest grade summa cum laude. In May 2016, under the program Bridge Fellowship, he was also awarded a fellowship by the Zukunftskolleg (excellence center of research) at the University of Konstanz. From May to August 2016 and in January 2017, he worked as a researcher at the Zukunftskolleg at the University of Konstanz and during the winter semester 2016/2017, he has restarted my academic career as assistant professor at the Palestine Polytechnic University in Palestine. Finally, he had the great honor to be awarded a postdoctoral fellowship by the DAAD under the distinguished program Postdoctoral Researchers International Mobility Experience (P.R.I.M.E.), which is funded by the German Federal Ministry of Education and Research and the European Union. The support is provided for 18 months of which the first 12 months (01.02.2017 – 31.01.2018) were spent at the University of Regina in Canada and the remaining 6 months (01.02.2018 – 31.07.2018) at the University of Konstanz in Germany serving as a reintegration phase. According to the DAAD statistics, he is the first Palestinian and the second Arab to be awarded the P.R.I.M.E. fellowship since it has been launched. Recently and among more than 400 applicants from Germany and the Arab world, Dr. Adm beside 13 scientists were selected for the membership of the Arab-German Young Academy of Sciences and Humanities (AGYA).

Dr. Adm was able to solve some challenging mathematical problems; A conjecture, which was posed in 1982 by Prof. Dr. Garloff. Dr. Adm has fourteen papers which were published in leading journals of linear algebra and matrix theory. Currently, he has about five papers in preparation. Furthermore, Dr. Adm presented talks in more than thirteen national and international conferences in Palestine, Germany, China, Czech Republic, Portugal, Belgium, Canada, and USA and he is also serving as a reviewer for the journals Linear Algebra and Its Applications, Linear and Multilinear Algebra, Applications and Applied Mathematics: An International Journal, and for the Mathematical Reviews.