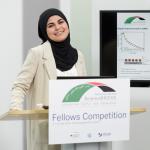 Research Purpose; The main aim of my research is an investigation of the structural and magnetic correlations of highly ordered assemblies of magnetic nanoparticles deposited on a surface. Regular arrangements of magnetic nanoparticles into 2D and 3D highly ordered structures are fundamentally interesting regarding the understanding of magnetic interactions, for a rational design towards potential applications in information technology and spintronics and due to their unique optical and electronic properties which strongly differ from those of the individual building blocks due to the structural and magnetic ordering inside self-assembled systems. In order to reach high coherence of the lateral order, the nanoparticles deposited on pre-patterned substrates, obtained using several top-down and bottom-up processes. The structural order investigated by small angle x-ray scattering under grazing incidence and the magnetic order will be investigated in the near future by small angle neutron scattering under grazing incidence with polarization analysis.

Main Impact: Highly ordered assemblies of magnetic nanoparticles have an impact on the creation of next-generation material design and for future electronic and magnetic nano-devices that require highly ordered arrangements of NPs over large areas formed with a simple method at low cost to meet the growing industrial needs.