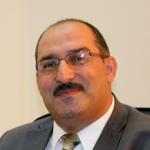 Mahmoud Almanassra is an Associate Professor of Mathematics/Statistics at Arab American University. He has been teaching there since 2013. He served as the department chairman of the Mathematics and Statistics department from 2013 until 2016. In 2016 and until present day, he has been serving as the Dean of Scientific Research. Dr. Almanassra previously taught abroad at the University of Wisconsin and Wartburg College, Iowa. He worked at University of Wisconsin-Marinette from 2006 to 2015, where he served twice as the division chair for the Natural and Math Division and associate chair for the Mathematics department. He worked at Wartburg from 2003 until 2006, and he served as the coordinator of the Statistics program there. Dr. Mahmoud received his Masters and Ph.D. degrees from the Southern Illinois University-Carbondale. He received them in 1999 and 2003, respectively. He worked as a teaching assistant during his study period, and he received the John M. H. Olmsted outstanding Ph. D. Teaching Assistant Award in 2002- 2003. He received his Bachelor’s degree in mathematics from Hebron University in 1995. Dr. Almanassra’s research interest are in the areas of Survival Analysis and Differential Equations