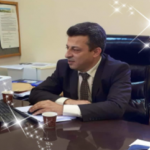 Dr. Muayad Abu Saa is the Vice President for academic affairs at Arab American University (AAUP) since 2019, the former Dean of Faculty of Sciences from 2017 to 2019 and the Head of Physics Department at AAUP from 2016 to 2019.

He is also a lecturer at Physics Department at the AAUP in both under graduate and graduate programs since 2003. Muayad Abu Saa has a PhD in Laser Physics from VUB (Free University of Brussels), a Master of Physics from EMU (Eastern Mediterranean University- North Cyprus) and a BSc in physics from Yarmouk University in Jordan.

He is a researcher in the fields of laser physics, semiconductors and nanotechnology. A list of publications can be found at research gate, Scopus and google scholar. He supervised Master Students and currently supervising 2 PhD students and a master student in co-operation with Julich research center in Germany through the Palestinian-Germany Science Bridge.

He participated in many research activities at Palestine Academy for Science and Technology and he is the coordinator of Palestinian Physics society.