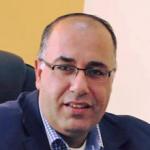 Murad Abusubaih received his PhD. in Telecommunications Engineering from Technical University of Berlin, Germany, in 2009, his M.sc. in Communications Engineering from Jordan University of Science and Technology, in 2001, and his B.sc. degree (with distinction) in computer systems engineering from Palestine Polytechnic University, Palestine, in 1999. During 2004-2009, he worked as research assistant at the Telecommunication Networks Group at the Technical University of Berlin. He has been working on Policies and Protocols for Wireless Networks. He has been involved in different projects: Cognitive Radio, Localization in Wireless Networks, and MESH networking. Since 2009, Dr. Abusubaih re-joined Palestine Polytechnic University (PPU) as an Assistant Professor in the Electrical Engineering Department. From 2011 to 2014, he chaired the Electrical Engineering Department at PPU. Dr. Abusubaih is now an Associate Professor at PPU. From 2015, he has been working as the Dean of Graduate Studies and Scientific Research at PPU. Dr. Abusubaih has published several research articles in journals and conferences. He has been been involved in different international projects, especially with EU.