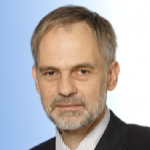 Prof. Dr. Uwe Rau is direct of the Institute for Energy and Climate Research, Department of Photovoltaics (IEK-5) and Forschungszentrum Jülich GmbH, as well as a professor in the faculty of electrical engineering an information technology at RWTH Aachen University, Germany.

Prof. Rau obtained his PhD in physics from the Eberhard Karls University of Tübingen. Before joining the staff at Jülich and Aachen in 2007, he held scientific positions at the Max-Planck Institute for Solid State Physics, the Sony Research Center in Yokohama, Japan, the University of Bayreuth and the University of Stuttgart.

Prof. Rau’s strong support of young scientists and scientific collaborations is shown through his positions as Scientific Director of the HITEC Graduate School and Deputy Director of the JARA Energy cooperation. He has been a member of the PGSB advisory committee since it’s start in 2016.