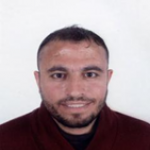 Ashraf Al-Rimawi received the B.S. degree in electrical engineering from Birzeit University in 2008, the master’s degree in wireless communication from the Jordan University of Science and Technology in 2012, and the Ph.D. degree in wireless communication from Bologna University in 2017. During his Ph.D. period, he participated in the H2020 Xcycle Project, Italy. He was a Teaching and Research Assistant with Al-Quds University, Duisburg-Essen University, Jordan University of Science and Technology, and Bologna University. He has been a Lecturer with the Department of Electrical and Computer Engineering, Birzeit University, Palestine, since 2012, where he is currently an Assistant Professor.